There are 27 households at Two Echo. Some of our members posted below, to help give a sampling of our community. (Note: Photos are not matched to descriptions.)

Amy and Chris and their two children have been involved in Two Echo from its earliest days.  Chris works for an alternative energy company, primarily on the solar heating end. Amy works  as Director of Finance & Publications for the Convention and Visitors Bureau in Portland; they enjoy participating in the many Two Echo Common House dinners, game nights, movie nights, in-community concerts and dances and all the other activities that makes up a busy Two Echo social life. 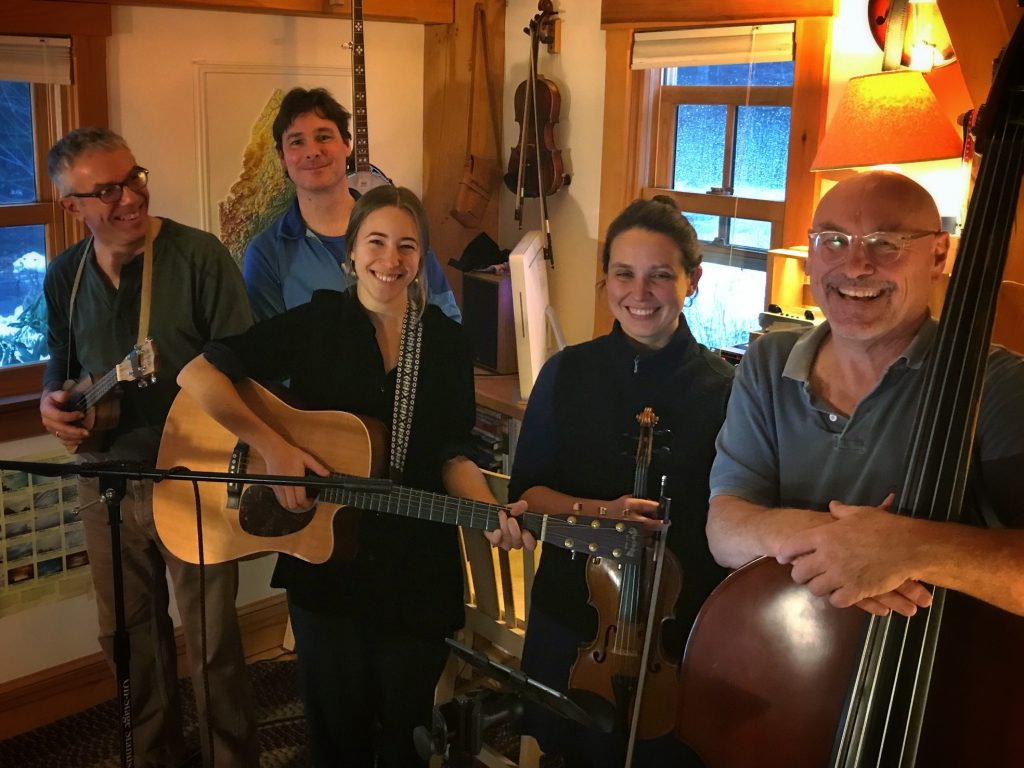 Randy and Betty have spent most of their “career” years involved in one way or another with people with developmental disabilities. Now “retired” Randy works part time at L.L. Bean and does a lot of bike riding. They have two grown children, a son who is a musician living in Massachusetts and a daughter who is married and living in nearby Freeport. Their grandson is the sunshine in their lives. In their free time they like to camp, travel, kayak and cross-country ski. Randy is an avid catch and release fly fisherman and likes listening to the blues. Betty has been known to garden in the rain and likes to make things with her hands.

John and Karen and their two children have lived at Two Echo for thirteen years in three different Two Echo houses. John is an Episcopal priest at St. Mark’s Church in Waterville; Karen works with the Refugee Resettlement Program in Portland and Lewiston. As a family they enjoy camping and frequent excursions to nearby White’s Beach to beat the summer heat. Katie and Rob and their two children live in the Two Echo home that Rob and his crew built in 1998. Rob has a building business. Katie is a former elementary school teacher who writes children’s books, including two that have been published.  Their household includes numerous animals including a dog, angora goats, and several chickens. Together and separately they enjoy such activities as walking and skiing in the Two Echo woods, camping, soccer, making crafts, playing music, and cooking.

Jean came to Maine after having lived in New Hampshire, Kentucky, Vermont, Massachusetts and New York. During earlier years in her life, Jean raised four children, taught school, ran for local political office, raised chickens, canned vegetables and dabbled in designing her future “dream houses.” Jean is just down the pedestrian lane from her daughter, Katie (mentioned above), and her delightful grandchildren.

Craig and Carol and their daughters Dana and Sara came to Two Echo in 1996. Craig helped craft our conservation easement and decision-making processes and Carol helped raise funds and persuade the town to purchase and conserve Cox Pinnacle nearby. Today Craig is a professional meeting facilitator and owner of Good Group Decisions and Carol works as a nurse practitioner. The girls are young adults now. Craig has served on the Two Echo Commons Committee for many years and has organized several Two Echo Olympics. He also maintains a community wood-fired sauna. Craig and Carol take full advantage of Two Echo’s woods and fields with regular walks and skiing in the winter. Larry, a commercial fisherman and his wife Clare, a Waldorf Educator, have lived at Two Echo since 2001. They are enjoying the joys and challenges of raising their three teenagers, ages 18, 16, & 14 and spending time with the family’s yellow Lab, Capt’n Leo. Larry loves to mountain bike, listen to country music, play disc golf &and spend time with his teens. When Clare’s not teaching or parenting she loves to felt, garden, attend Zumba classes, walk, and going out on dates with her best friend, Larry. Staying active and living in a diverse, close community means everything to Jim and Melissa. These retired homebuilders are
delighted to continue “working” here at Two Echo and to keep Jim’s Big Blue Tractor working as well. They found a warm welcome at Two Echo and a started a new chapter in their adventure of living.

Tim and Will bought their home at Two Echo in 2012 after a long search. Tim (a Maine native) is a garden center manager, and Will (from away) is a lawyer. They feel that enjoying good food with their neighbors is a special part of living at Two Echo.

Joe and Deb – There once was a couple from Mass,
Who moved to cohousing at last.
He works on peace while she is a nurse,
They agree that this verse could hardly be worse.
For fun he sails and with fiber she plays,
Of children and grandchildren many they’ve raised.
The small ones here are also quite dear,
As long their bikes don’t run into our ____.

Theme by Anders Noren — Up ↑